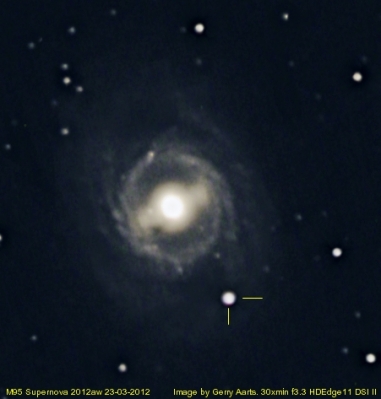 Supernova 2012aw was discovered 16/03/2012. This image was captured at Bundaleer observatory on 23/03/2012. M95 is a northern hemisphere galaxy discovered by Charles Messier in March 1781, rather fitting this supernova was also discovered in March 231 years on. I got clouded out again during the image capture process so this is only 15x2 minutes exposures with my Celestron HD Edge 11.

All club meetings at Penrith Observatory have been cancelled until further notice due to the risks posed by the coronavirus.

Linden Observatory will remain closed to visitors until further notice.