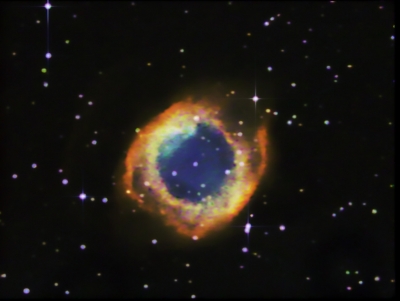 The Helix Nebula is sometimes referred to as as the "Eye of God". Called a planetary nebula (nothing to do with planets), early astronomers thought they looked like planets. About 650 light-years distant this is one of the closest planetary nebula from earth. A combination of 20 x 15 seconds exposures. Image obtained at our observing site at Linden Observatory 16th September 2007. Celestron GPS11 telescope with Hyperstar f1.8 lens, Meade DSIc. 20 x 30 seconds exposures.